Making the city of Rotterdam together

Luchtsingel is a crowd funded urban design project that aims to reconnect the currently isolated and run-down Rotterdam neighbourhood of Hofbogen by building a 350-meter pedestrian bridge that will reconnect it to the central district of the city. Luchtsingel literally translates into “canal of air.” It is used as a metaphor to refer to the comparable structure of the traditional Dutch city canals—except that Luchtsingel will be lifted up into the air, and will not be filled with water but with pedestrians instead.

Luchtsingel was initiated by the architects of Zones Urbaines Sensibles (ZUS). ZUS is of the opinion that architecture has become marginalised in the last two decades by responding primarily to market demands rather than public needs. That’s why it wants to reemphasise architecture’s important public function. Starting from the belief that everything and every place has the inherent potential to be unique and exciting, ZUS investigates the urban landscape in an attempt to expose contemporary social challenges. Ranging from urban plans and architecture to installations and fashion, it offers solicited and unsolicited advice and design that is inspired by the specific qualities of the context and that is meant to encourage intervention in the current state of things.
Luchtsingel is set within the broader context of I Make Rotterdam, an initiative by the International Architecture Biennale Rotterdam (IABR) and ZUS, that focuses on new ways of creating urban quality of life in a post-crisis economy. I Make Rotterdam (2012-2014) is meant to offer a contemporary alternative to the traditional practice of large-scale city planning. Within the context of the I make Rotterdam initiative, different projects were initiated by different parties. Luchtsingel is one of them and forms the backbone of the initiative as it ties the different projects together.

A successful formula: Building Luchtsingel together
In less than a year, Luchtsingel went from initiation to realisation. It is a fully crowd funded project that anyone can contribute to. This alternative way of fund raising has proven to be a successful formula for Luchtsingel. More than 1,300 people have contributed to the bridge by buying the wooden boards that are used in the construction of the bridge. The boards are personalised by adding the name, message or wedding date of the person that paid for it.
Luchtsingel is being built in different phases. The first part of the bridge was built in 2012. Next, the bridge will be extended by another one hundred meters in the direction of the neighbourhood of Hofbogen in June 2013. By phasing the building process, the actual Luchtsingel becomes visible step by step, which allows for people to become involved and anticipate the effects of the end product.

Urban life up in the air
Luchtsingel aims to revive urban quality of life by designing small-scale interventions to interact with life in the city. For example, the area surrounding the adjoining Hofplein is currently considered to be at the backside of the city of Rotterdam. Cars dominate it and there is a lack of public space at street level. The number of empty buildings is increasing quickly. With the development of Luchtsingel, combined with other initiatives and developments at street level, the area will gain safe and green public space, which will make the area attractive and lively again—in addition to offering new access to it.
In the slipstream of Luchtsingel, many other initiatives have followed. For example, a cultural square (Cultuurplein) is in the making and will be built early 2014. Cultuurplein, a new commons, is a place where cultural activities can take place in a green setting on a rooftop in Hofbogen area, right where Luchtsingel will be landing. Also, Biergarten—one of the sunniest terraces in the city of Rotterdam—was established and enjoyed by a great number of Rotterdammers. Additionally, Dakakker was initiated, which is a rooftop that is wholly dedicated to urban farming.

Unsolicited advice
ZUS came up with the idea for Luchtsingel while looking into the city of Rotterdam’s central district master plan. The master plan contains the redesign of the street plan in the Hofbogen area to accommodate redevelopments that are planned for the city centre. The pedestrian bridge connecting the centre with Hofbogen turns out to be a perfectly logical addition to the city’s plans. ZUS was not asked to contribute its thoughts but, rather, took its own initiative—a manifestation of architectural activism with much desired social impact.

Luchtsingel and the initiatives related to it bring different sustainist elements together. Jointly, they connect social and ecological sustainability. They are about pro-actively involving citizens in reviving urban green and creating new common ground. The design approach is collaborative, contextual, and activist.

Connectedness
The bridge reconnects pedestrians to a local neighbourhood that was previously dominated by cars. The project is about redesigning the relationship that people have with the urban environment and with each other. Luchtsingel is building a community where there wasn’t one before.

Localism
ZUS was inspired by the specific qualities of the Hofbogen area to create localist attributes with their “canal of air,” such as a new sense of place and locally rooted experiences. The project gives meaning to newly created public space and to a new commons.

Sharing
Crowd funding not only provides an alternative way of fund raising but, by personalizing the wooden boards, it will remain a long lasting physical landmark of a “sharing culture.” 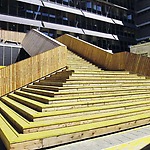