Creating community through the art of brewing

The mobile Outside Brewery installation was developed by designer Henriëtte Waal as a way to highlight the culture of home brewing and reconnect the brewing process to the landscape. Waal perceives the actual skill of brewing to be a vital aspect of her design process. In her design projects, she makes an effort to actually learn a new skill herself that will allow her to become part of a specific subculture. “This method makes it possible to work from the inside out as a designer,” she explains. In the case of the Outside Brewery, collecting and organising knowledge and expertise on the craft, culture and location of beer brewing is her contribution to uniting different worlds, and developing new tastes together—literally.

Rainwater and wild plants from the surrounding area function as signature ingredients to the
unique brand of “landscape beer” (Landschapsbier) that is produced by the installation. By
using water from local ditches and heating, cooking, filtering, flavouring and fermenting it,
the Outside Brewery essentially makes a place or a landscape “drink-able” in the form of a beer. Since the start of the project in 2009, beer has been brewed in different locations around the Netherlands, producing a series of one-of-a-kind local brews. In the process, Waal developed some fine brewing skills of her own and even became a certified beer judge.

Co-designing an outside brewery
The Outside Brewery was originally developed in the framework of the cultural programme
“Eat-able Landscape” (Eetbaar Landschap) that was hosted by the city of Tilburg in 2009.
In and around the city of Tilburg alone, there are more than fifty amateur home brewers. Their makeshift breweries tend to be located in sheds and garages. They jointly produce an estimated 15,000 litres of beer annually. Waal mobilised these home brewers. They got to know each other and their surroundings in a special way. The joint design of the Outside Brewery followed, producing litres of Klavertje Bier from using the locally abundant red clover (Trifolium pratense) as its primary ingredient.

Ingredients: malt, water, and herbs
Water retrieved from a nearby ditch or pond is purified in a filtering tower. The filtering
construction consists of a used paper container, a fluid container, as well as individual water
bottles. Each of the containers holds a different filter, but all of them are made of natural
materials. The paper container holds a filter that is made of ceramics. The other filters use coal as well as sand in other to purify the water. After the filtering process is finished, Waal uses the water to brew beer by adding malt and— most importantly—a mix of locally harvested herbs that is used to add a distinct taste.

Life at the local brewery
Different landscapes generate different local ingredients, which in turn generate different
local beer recipes. “As designers, we are usually hosted by a given landscape without knowing very much about its specific qualities,” Waal says. She refers to the French concept of terroir, which can be loosely translated as “a sense of place,” and which represents the interaction between unique local characteristics that are expressed in agricultural products. At the core of the concept is the assumption that the land from which the product has grown imparts a unique quality that is specific to that growing site. The geography, geology and climate of a certain place all play their part in it. “In order to
truly understand the local, you need to collaborate with the locals,” she adds. “I always feel
the need to go local myself.” New local beers have surfaced, carrying meaningful names such as Rotterdam Snow Beer (Rotterdams Sneeuwbier), Sloterplas Blond Beer (Sloterplas Blond), Clover Beer (Klavertje Bier), and Rotsoord Beer (Rotsoord
Bier). During the Amsterdam Sloterplas Festival in 2010, the Outside Brewery brewed
Sloterplas Blond Beer, which is a clear beer made of water from Sloterplas Lake and has
a naturally low alcohol percentage of only 3%. The Outside Brewery is a mobile installation
capable of travelling. Additionally, designer Waal offers brewing workshops—she terms
them “beer education”—so as to make sure that people continue to have a sense of what they are actually drinking. And to safeguard this valuable Dutch cultural product from extinction.

The design process for making “landscape beer” unites a range of sustainist elements. It emphasises the sharing of skills, raises environmental awareness, encourages appreciation of local place and natural resources, and builds community.

The Outside Brewery, as a designed meeting place and local laboratory for brewing, connects crafts to the local context and terroir, whilst using natural ingredients in the
beer making process.

By combining these elements it goes well beyond functional design, it creates meaning and experience that is part of the flavour of the product, quite literally.

Localism
The local character of the project is essential to it. The fundamental ingredients of the “landscape beer”—from the water to the skills—are all local. The design enhances a
sense of place, because both its meaning and experience are locally rooted. As a result, the Outside Brewery, the beer, and its taste become part of the local cultural heritage.

Connected ness
A community is built around the skills of beer making in a local context. It connects people by the exchange of skills and the joint design of a local beer. Relationships are one of
the primary outcomes of the design: tasting events connect local beer lovers—both producers and consumers—to each
other and to their natural environment.

Proportionality
The success of the design results from its limited scale. The resources and ingredients are close by and producing on the spot naturally gives the product a human scale. Small-scale local production, which is deliberately designed for
an exclusive market only, is an essential attribute.
It gives this beer, and the experience of drinking it,
a unique quality. 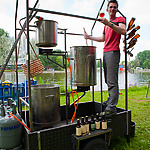 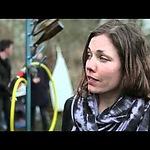 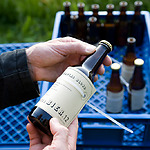