As “the game”, we present an interactive narrative, like an Alternate Reality Game. Here the players see the story unfold through the postings and movie clips of the different characters. Throughout the story, the characters face a number of challenges and the players help them find solutions.
Various thematic episodes will be built on this narrative. Participants will meet online and real-life.

Most importantly, this game narrative makes use of all social networking capabilities, so it aids players in coming together, sharing and collaborating with each other and with the game characters as well.
One of the most important characteristics of PlayReal is that we involve real organisations to make help turn the solutions into reality. We design game characters based on the organisation’s knowledge, values and resources. And they interact with the players in the three game environments: virtual world, social gamespace and real-life installation (Geodome).
Players participate in the problem-solving process using a variety of media to enrich PlayReal’s social environment and contribute to a shared archive.

Features for Players and Playing Characters:

PlayReal works with open narrative frames rather than closed narrative structures. This offers us the possibility to adapt the story for any real-life issue we want to incorporate.
A narrative structure, which implies a beginning, a development, and a resolution, would not lend itself well to the highly interactive and open-ended nature of PlayReal projects. Moreover, the structures of a fully-prefabricated narrative would impede the ideally seamless interaction with the real world.
On the other hand, a narrative frame presents the situation that needs to be resolved without dictating the steps that are needed to resolve it. The narrative frame is totally customisable: episodes can be inserted as needed and scenarios modified to match the players’ actions and decisions. Any number of plots and subplots can be created to incorporate special challenges, encourage particular strategies or meet specific goals.
The narrative frame provides the PlayReal participants with an entry point into an alternate space (an alternate reality, a distant planet, the future, etc.) in which the story unfolds, based in large measure on their activities in the real world and their interaction on the social gamespace.

The narrative Framework of PlayReal is about an Interplanetary Consortium (IC), a galaxy-wide association of planets which promotes healthy planetary development through collaboration among members, is considering Planet Earth for membership. However, there is some hesitation since, according to its charter, members must be must be advanced societies which have achieved significant planetary awareness, sensible technological development, and strategies to sustain a relatively equitable and peaceful society.
The IC considers that Planet Earth has the means to meet these requirements but it wants to make sure that it also has the will to do so. Therefore, the IC has sent agent Verlo Aiskros to gauge Earth’s possibilities of meeting IC standards.
In the context of the Interplanetary Consortium, custom-designed planets can offer all sorts of scenarios to address different kinds of challenges. Such a space allows for the introduction of missions (adventures, quests, etc.), plot twists, characters (main characters to help move the story along, allies who may provide clues, and antagonists who may create obstacles), and accidents (unintended consequences, natural disasters, etc.) which help maintain player interest and engagement. The possibilities are endless.

Once on Earth, Aiskros contacted PlayReal to manage a pilot project which set up communications between a group of young people on Earth and a group on Dheghom, a distant planet which is very similar to Earth but has not yet advanced so far in its civilisation. Through dialogue and collaboration, the settlers on Dheghom will be able to take advantage of suitable Earth technologies while project participants on Earth will have the possibility of gauging the impact of its suggestions on both the social and natural environment.

The first priority of the Dheghomian settlement was to set up food production. In order to offer useful suggestions to the settler community, PlayReal consulted with “the Gardener”, an IC Counsellor with planting expertise (CityPlot). Project participants planted a small garden at 665 which was replicated by the settlers on Dheghom. Later, they helped with all the issues concerning the establishment of a sustainable village in Dheghom and built scale model solutions.

A mysterious entity who speaks for the Intergalactic Consortium Board. Although he is not explicit on the matter, his attitude suggests that he would rather see Project Dheghom succeed than fail.

IC Observer responsible for the Project Dheghom. Widely experienced in interplanetary politics and diplomacy, the IC Board selected him for this mission for his practical sense and efficacy. Verlo hismself, however, is not overly optimistic about the project’s chances of success. Nevertheless, he is willing to undertake it not only because of the project’s importance, but out of professional pride.

A number of experts in different fields which the IC has made available to assist with Project Dheghom.

In Earth years she would be around 12 years old. She is a very outgoing young woman and a leader among the settler children. She has a practical mind that likes nothing more than to solve problems. Although she can be a little mischievous, she is good hearted and willing to help anyone who needs it. She has great energy and is always ready to embark on an adventure.

The eldest of the settlers, grandmother to all. Her long experience makes her wise and everyone respects her opinion. She can seem a bit nagging at times but it is only out of concern for the well being of her people. Becomes of her long memory, she has many stories to tell. Everyone likes to listen to her stories which contain much information about the settler’s past.

With a particularly good memory and a flare for words, Tloqai is the settlers’ storyteller. He is the main communicator between the Earthlings and his own people. He is very curious so he is anxious to collaborate with the Earthlings and see what will come of it. On the other hand, he can’t help but be concerned about the risks involved with starting a new way of life.

Players who have earned a special recognition for outstanding effort. They report directly to IC Observer Verlo Aiskros on group activities. They can be known by the Dheghomian Relic that they have been awarded to wear as a symbol of their position. 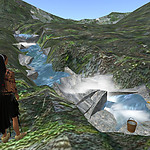 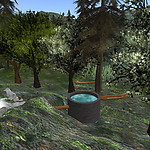 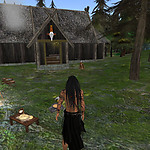 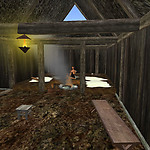 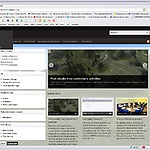 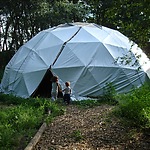