Urban resilience in a time of change

Shifting ground in a Parisian suburb

Agrocité is an urban agriculture programme in the suburb of Colombes, which is an underprivileged town of 84,000 inhabitants near the city of Paris. The pilot programme that started in early 2012 is designed to introduce the dynamics of urban agriculture to community life. This will reconnect neighbours to one another and their living environment, empower them, and help revitalise a neglected urban context. The project includes a micro-experimental farm, community gardens, educational and cultural spaces, and devices for energy production, composting and rainwater recycling.

Agrocité is part of a wider effort, called R-Urban, that encourages networks of urban resilience in European cities. R-Urban is a concept by Atelier d’Architecture Autogérée. It envisions the bottom-up development of urban resilience, cultivating the ability of urban systems to adapt and thrive in changing circumstances. It involves the creation of a network of locally closed ecological cycles that link a series of urban activities together. “To overcome the current crisis we must try, to produce what we consume and consume what we produce,” Atelier d’Architecture Autogérée explains. Within the R-Urban project, this chain of production and consumption is interpreted well beyond the material aspects of it, and includes the cultural, cognitive, and affective dimensions of production and consumption just as well.

Small interventions to tackle big themes
Small pioneering interventions are designed to tackle big social and ecological themes. New collective solidarity-based practices come into being through co-workership of neighbours and professionals. These new practices include ecological approaches such as reduce, reuse and recycle, or iterations as repair, re-design, re-think, and re-assemble. But it does not stop there. Environmental issues (CO2 reduction, waste recycling, ecological footprint reduction) and social, economic and cultural issues (re-skilling, job creation, diverse economies) are addressed, too.

At present, R-Urban is testing how democratic and bottom–up processes of resilient regeneration work in a suburban context so that future strategies for change may be adapted to this. “No radical change will happen in current society without the involvement of the many,” Atelier d’Architecture Autogérée argues. That’s why the R-Urban concept is explicitly designed for the purpose of appropriation by others. A growing group of neighbours in the Colombes area is already applying the concept to affecting real change in their living environment.

From the local to the regional
R-Urban explores the possibilities of enhancing the capacity of urban resilience by a network of resident-run facilities. Here, complementarities between different fields of activity are being created, be they economic, agricultural, social, or cultural. Workshops are offered that teach participants how to work with stock materials, such as reclaimed wood, that they collect themselves in the surrounding areas throughout the year. This kind of collaborative local production supports the emergence of alternative models of living, producing, and consuming between the urban and the rural.

Examples of alternative production and consumption are manifold. In Colombes, surplus vegetables are being recycled into compost for farmland or heating. Rainwater is being collected for “aquaponics”—which is a sustainable food production system that combines traditional aquaculture with hydroponics in a symbiotic environment—to serve the local food economy. An example of regional collaboration is R-Urban’s cooperation with the Clinamen Association. The association aims to increase the dynamics in the urban territory by promoting agricultural practices that originate in the countryside. Led by their shepherd, Olivier Marcouyoux, the association seeks to provide a place for animals in urban areas to allow city dwellers to remain in touch with the culture of their ancestors.

Collective Ownership
Agrocité itself works as a network, too. The network shares cultivable land that includes an experimental urban agricultural farm, a shared garden for neighbourhood residents, an educational garden, and a shared greenhouse for plants and seedlings. The buildings include prototypes for organic intensive farming. There is a seed library, a vegetable market with local agricultural products, a collective café, a cooking facility, and a collective bread oven. The R-Urban cooperative land trust consists of founding members who manage the land. In this way, they try to find a collective answer to the problem of financial access to land—while at the same time reinventing collective practices and uses of the city, in addition to being responsible environmentally and showing social solidarity.

The small-scale, context-specific and engaging approach of this “eco-urban resilience” design project qualifies as sustainist design because it strengthens the bottom-up empowerment of the people living in the suburb of Colombes. Small pioneering interventions fuel new collective practices that aim for ecological, social, economic, and cultural transition simultaneously. This increases the local community’s resilience. Agrocité contributes to the networked movement of R-Urban, which is growing fast by sharing knowledge with other (distributed) projects. It focuses indirectly on the power of local, small-scale, yet deeply rooted co-design.

Connectedness
People connect to nature and crafts by going there themselves. In the workshops that are offered by R-Urban, they become reconnected and they (re)discover that “making things” is a way to master their own lives. The design process is participative and open to anyone. It is inclusive and connects professionals and amateurs, young and old, and people from various cultural backgrounds.

Localism
Agrocité is creating a (physical) local base and a sense of place by combining small-scale food production and peer-to-peer education in a local situation. It transforms an undefined public space into a commons by inviting neighbours to examine the qualities that are at hand within their community.

Sharing
The food that is produced is not owned by anyone, but by everyone—just like the land, the equipment to cultivate it, and the buildings. Everything is owned by the collective and managed by a cooperative land trust.

Proportionality
The R-Urban strategy and Agrocité programme is defined by the principle that we should “produce what we consume, and consume what we produce.” 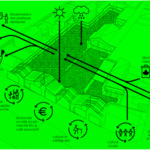