Illustrator, painter and fashion designer Karim Adduchi was born in Imzouren, Morocco, in 1988. Parents us clothiers, he grew up between the sewing machines and threads. Moved at the age of five to Barcelona. As it was his first time ever to attend school, but unable to speak, Adduchi turned to drawing as a means of self-expression. Seeing great talent in his drawings, his tutor urged him to attend a strict and disciplined special fine arts institution to make the most out of his potential and communicate. After that he attended the University of Fine Arts in Barcelona, where Adduchi further developed his art. Drawing inspiration from both the Italian Renaissance and contemporary art, he laid the fundaments for his recognisable style of illustrating. In 2011 Adduchi moved to Amsterdam to study fashion design at the Gerrit Rietveld in which he graduated in 2015 with a striking collection called ‘She Knows Why the Caged Bird Sings’. With bulbous volumes, traditional Berber arts and crafts and smart tailoring it fittingly received international press coverage. Even though immersed in the young and creative cultural scene in Amsterdam, Adduchi kept to his own ideas and sentiments about fashion and art. 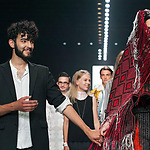