On the 27th and 28th of September Buurtmakers Festival took place in Wildeman, a neighbourhood in Amsterdam Nieuw-West. Local residents, artists, musicians and designers gave workshops and demonstrated their skills. Many interesting initiatives combined to create a uniquely creative festival environment. The Buurtmakers Festival showed how sharing knowledge, localism and creativity are creating new connections.

A taste of Wildeman
The different cultures of the neighbourhood came together in our open kitchen. Local women joined forces to cook, bake and exchange all sorts of recipes and tips. Everybody was invited to step into the kitchen and learn more about the special dishes. On the menu we had the delicious chicken soup from Idiatou, Pakistani snacks from Farhat, great lentil dishes from Rahwa, smoked mackerel made in the local oven, freshly baked bread, Hanna’s Ethiopian coffee and elderflower lemonade from Urbaniahoeve. Everything was made with love with fresh and local ingredients.
This open kitchen showed us the value of sharing and what it can bring us socially.

The creators of Wildeman
Besides feasting on all the tasty snacks and drinks, the public was invited to participate in the many workshops run by Wildeman’s creators. Alexander gave a photography workshop and took residents through the streets of the Wildeman Neighbourhood to learn how to find content and compose a photograph. Buurtwerkplaats Noorderhof showed people how to use a wood lathe, Lara worked with guests to create 3D sculptures from digital models, Paul, Vera and Esther encouraged the public to draw/ write what and how they share in the community for a research project on Wildeman’s neighbourhood ecology. There was also plenty of creative activities for children. The programme ranged from XXL French knitting with the WAAG Society, creating your own superhero with Goods Design, printing your own personalized t-shirt with Joost, making belts out of bicycle tires with Felino and a co-design project where everybody could make a life-size artwork together with Yohannes and EInore. What we witnessed during this festival is a shift in focus from the individual to the collective and the corresponding emergence of a culture of collaboration and exchange.

Singing in the Wildeman Neighbourhood
And what is a festival without music? Songwriters Flecha Moon and Dawn Bird performed on stage and Yuchi Cordabo and Runny Margatia introduced the crowd to the music of Curacao and gave it their own twist.

More about makers+co & The Beach
The festival took place during Broedplaatsendag and Burendag. Garage Notweg celebrated the 4th Broedplaatsendag with activities from Makers+co, Bound by Craft, DineDine Design, Creapalet, Goods and the Beach. 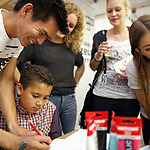 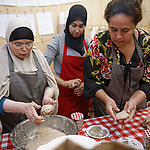 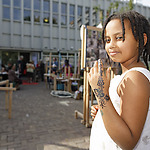 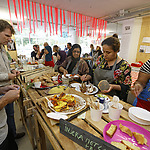 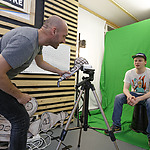