A civilisation starter kit in the making

The Global Village Construction Set (GVCS) is an open source technological platform that unites farmers, engineers, and others. Together, they prototype the fifty industrial machines that are needed to build a small, sustainable civilisation that accommodates modern comforts. Included are machines such as tractors, bakery ovens, dairy milkers, and cars. All machines are intended to be modular, do-it-yourself, and low-cost. In this way, the Global Village Construction Set is much like a life-size Lego set that has the potential to create entire economies. Groups in different parts of the United States are developing blueprints that are then built and tested at a farm in rural Missouri. It is the team’s mission to ultimately be able to offer clear-cut fabrication instructions to help communities become more self-sufficient. The entire set of fifty machines is scheduled for release late 2015.

Physicist Marcin Jakubowski founded the initiative in 2003 when his industrially manufactured tractor kept breaking down. This motivated him to look into robust yet low-cost machines that he could build himself. His efforts were rewarded as he discovered that it is indeed possible to achieve industrial productivity on a small scale. When he started sharing his designs online via the Open Source Ecology Wiki, people from all over the world began prototyping new machines. A movement was born.

An entirely new open business model
The popularity of the project demonstrates that the open source methodology can be effective far beyond the world of software development. It has now claimed its rightful place in the world of hardware, too. Jakubowski firmly focuses on hardware, because he is certain it can change people’s lives in tangible and material ways. And the results so far are quite convincing. On average, the costs of building and maintaining the GVCS machines are about eight times lower as compared to buying similar machines from industrial manufacturers. This significantly lowers the barriers for newcomers to enter into farming, building, and manufacturing. It creates opportunities for an entirely new open business model—not just for people in the West, but in the developing world alike.

In January 2013, the Global Village Construction Set was presented in Haiti as part of the Relief 2.0 Panel on Sustainable Recovery that aims to contribute to the recovery efforts since the major earthquake in 2010. There is particular potential here for use of the Life Trac, which is a multi-purpose tractor that doubles as a workhorse backbone for many of the other GVCS machines. Also, the Power Cube—a universal, self-contained power unit that is designed to be an interchangeable power supply for GVCS technologies—could prove to be very useful in this context. Both of them will be used as pilots for local production.

Cultural transformation is on its way
The culturally transformative potential of this and other open hardware technology projects is vast. In the decades to come, the associated do-it-yourself culture will be an important asset in fighting the scarcity that the world currently experiences. In this light, Jakubowski emphasises the artificiality of the current scarcity. Instead, he advocates the idea of an era of “post-scarcity.” He says: “The scarcity-based economy is the status quo of today because of the way human relations have evolved. Not everybody is provided for. There is a lot of suffering in an absolute abundance of resources, such as rocks, sunlight, plants, and water, from which all economic wealth originates. (…) Post-scarcity means that we would be connected more closely to [those] resources, when we have the means and tools to transform those resources into the feedstock of modern civilisation.”

The Global Village Construction Set embraces sustainist culture by practising an open network approach and emphasising nature as a source. The open hardware technological platform enables communities to build and use robust and low-cost machines, creating opportunities for an open business model with new players. The initiative (re)connects people to the abundant natural resources and their potential.

Sharing
By sharing his designs, the founder of GVCS has created an open source ecology Wiki as well as a new movement. The sharing of knowledge for building open source hardware can help to unleash massive amounts of human potential and can change people’s lives significantly.

Proportionality
Small-scale and sustainable initiatives like GVCS emphasise the fact that the scarcity-based economy we have created is partly artificial and unnecessary. When specific knowledge and materials are used to make what is needed in the right place at the right time, scarcity will no longer rule the economic system. 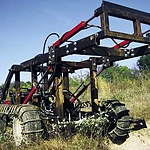