Plantascraper is the world’s first large-scale vertical greenhouse that uses an internal "vegetable transportation helix" to maximise sun exposure. The initiative will increase urban self-sufficiency and make food production less costly, both for the environment and for consumers.

The Swedish city of Linköping will be home to a 17-story vertical greenhouse, opening in late 2013. The greenhouse is a conical glass building that uses an internal "transportation helix" to carry potted vegetables around on conveyors. As plants travel around the helix, they rotate for maximum sun exposure. The building will use less energy than a traditional greenhouse, take advantage of "spillage heat" that energy companies cannot sell, digest waste to produce biogas and plant fertilisers, and decrease carbon dioxide emissions while eliminating the environmental costs of long-distance transportation. What is more, growing plants in a controlled environment will decrease the amount of water, energy, and pesticides needed.
The greenhouse will serve as a regenerating food bank, tackling urban sprawl while making the city self-sufficient. Agricultural design firm Plantagon predicts that growing these plants in the city will make food production less costly both for the environment and for consumers. The new vertical greenhouse will also serve as an international Centre of Excellence for Urban Agriculture. Plantagon hopes to install the transportation helix technology in regular office buildings around the world, eliminating the need to build entirely new structures.

Why is this a good example of sustainist design?
The ambition of the Plantagon initiative is to change the way we produce ecological foods: cut costs and environmental damage by eliminating transportation and delivering directly to consumers in city areas. Plantagon explicitly intends to value social responsibility, transparency and sharing as much as financial engagement and profit.
As the world's population grows increasingly urban—according to a United Nations estimation, 80 percent of the world's residents will live in cities by 2050—self-sufficient integrated food producing solutions are needed urgently. The project has the potential to integrate the sustainist qualities of localism and proportionality (scaling up urban farming). 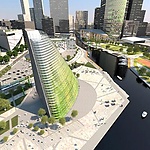