Albina Ruiz started worrying about health and environmental problems caused by garbage in Peru when she was a student studying industrial engineering. After writing her thesis, she came up with an idea for a new community-managed system of waste collection that she hoped would serve as a model for urban and rural communities around Peru.

Ruiz created the organization because government-run garbage collection in Peru had not been effective and illegal dumping was causing environmental deterioration and ground water contamination. The garbage crisis arose partly because municipalities failed to collect the funds necessary to maintain the infrastructure. Because the system wasn't working, people didn't pay their monthly fees, making the garbage problem worse. Ruiz set out to break that cycle.

In addition to taking care of the garbage problem, her micro-enterprise model provides self-employment opportunities to local residents in neighbourhoods where unemployment rates are high. The businesses are often run by women who go door to door collecting garbage and fees, and educating people about respecting and protecting their environment. Some women have even built profitable businesses by creating products like organic fertilizer out of the trash they collect.

By generating income for local residents and involving them in the process of improving their neighbourhood, Ruiz has succeeded in obtaining pay rates of up to 98 percent. The government collection pay rates sunk as low as 40 percent.

Ruiz's simple idea has become a successful business and community-organizing model that benefits large numbers of people and has worldwide potential. 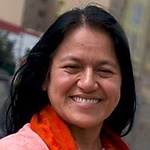